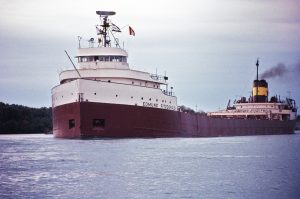 Blogging note** My posterous site is being dumb, so I’m here on my main site for the time being.

THE NATIONAL WEATHER SERVICE IN GAYLORD HAS NOW ISSUED A WARNING FOR A DANGEROUS COMBINATION OF HEAVY SNOW AND BLOWING SNOW FROM 7 AM THURSDAY TO 7 PM EST FRIDAY.

I’ve looked through the model runs from last night, which is how HPC got this low track. This looks good. In fact, this a bit further south, which means we are more likely in the colder air so that there will be a minimum of rain mixing in with the snow. Winds don’t look like they will get to Blizzard conditions, but it will be blowing enough late Thursday that it won’t matter in some of the more open areas.

So for the 12 hours ending at 7pm Thursday (00zFri), here are the snow fall accumulations to be expected. The best snow fall areas will be in the southwest portion of the NWS Gaylord county warning area with the axis of the highest amounts roughly running from Frankfort to Drummond Island. For the 12 hour period (7a-7p), these snow fall totals exceed the warning criteria of 6 inches in 12 hours.

This is for 7pm Thursday to 7am Friday, with the axis of the best snow still along the line from Frankfort to Drummond Island. While these totals don’t exceed the warning criteria for 12 hours. when added to the previous map, the 24 hour totals exceed the 24 hour warning criteria of 8 inches. Not to mention that the winds overnight will be blowing about 20 to 30 mph.

Of course, let’s not forget our friend, lake effect. It will continue through the weekend. Some areas receive more snow on top of the storm system snow through the weekend. Too early to tell the amounts. However, Friday and Friday night could continue to be significant, as the mid level moisture will be there. Saturday and Sunday, depending on how much moisture is there will determine whether we get light to moderate amounts, or moderate to heavy. Stay tuned.

I will be Going to GRR and back on Thursday…I’ll try to get some pictures and do some on the fly blogging if I can.

No sooner did September start that our first cold air outbreak occur and we are getting lake effect rain showers. Droplets were a little hard to see in the picture, but the somewhat lowered visibility can be seen with the break in the clouds.

Here’s the radar from the afternoon with the rain band off the lake.

Of course, with those words, that’s when the sky splits open and it pours. However, if you look at this picture:

Then you see that the main rain has again gone by to the north and the south. This is also the case of Boyne Falls, where I am typing this morning. I know many will say, “But Jeff, look at that mass of rain to the west of you. Surely that will bring some relief?” Well as I have been watching it on the radar the heavier rain has been heading south and the weaker area is beginning to open up.

To see how we got into our drought, watch this video below put together by Nick Schwartz (aka Shaggy), a meteorological intern at our office.

They be bubbling already!

I can still get come geeking in before work.

From the Storm prediction Center:

So we may be under a wach in NW Lower Michigan coming up with the next hour for a good portion of the night. Mary is in town, so if the office did call me to work the event, I couldn’t with no transport. So, it looks like I will be liveblogging anything that happens this evening.

Here’s the discussion from SPC this afternoon:

As you can read there is a chance for stuff to form in northern Minnesota and Wisconsin, where there are two tornado watches currently. Then as the storms merge, a large complex of thunderstorms with high winds could form and move into Upper and Northern Lower Michigan. The News story from NWS Gaylord has when we are expecting the worst stuff and what it will be: Some thunderstorms tonight will have the potential to be severe, mainly between 10 pm and 6 am. The main severe weather threats will be:

So far, the there are thunderstorms are forming, but no complex as of yet.

As you saw previously, in the weather category, I was live blogging the thunderstorms as they came through the region May22nd. Well, we have a better chance a severe weather on June 1st (tomorrow). I won’t be able to live blog it, since I will be working while it is occuring. So keep up with the weather at weather.gov/gaylord.

I added the snapshot of our sounding this evening from the office. Did you see the SFC and ML LI? -8c and -6c respectively. If this air mass remains in place over the region for tomorrow, things are just going to go vertical.